Think of the advantage of being able to combine, in one destination, a wealth of monuments, museums, culture and gastronomy with the possibility of stretching out in the sun or simply taking a walk along the beach. In the same city, you can delight in the genius of Picasso or visit a fabulous set of attractions such as the Alcazaba, Gibralfaro and the Roman Theatre, and at the same time enjoy some great beaches where you can relax and rest.

Casa Málaga is situated in the heart of this amazing city, a footstep away from the famous Plaza de la Merced. However once you enter the gates leading to it, you will be immersed in the calm tranquility of the courtyard which leads to the traditional front door and marble staircase of this apartment block. Once inside you will be captivated by this traditional entry way to the apartment itself. Opening the door you will be transported into a cool, calm, contemporary space, newly modernised with attention to detail and every thing you will require for your stay in this City. The apartment door leads into a light, modern, open plan living space which includes a contemporary style living room and kitchen diner, which is fully equipped for your convenience. This leads to a traditional covered patio, enhanced with typically Spanish tiling and a comfortable seating and dining area, where you can eat, drink and chill after a day exploring the sights of Málaga. There are also two, bright airy double bedrooms which share a beautifully refurbished and modern bathroom with a walk in shower. In fact you will find it a home from home as every aspect of your stay has been taken care of so that you can enjoy the hospitality this amazingly vibrant City offers you. 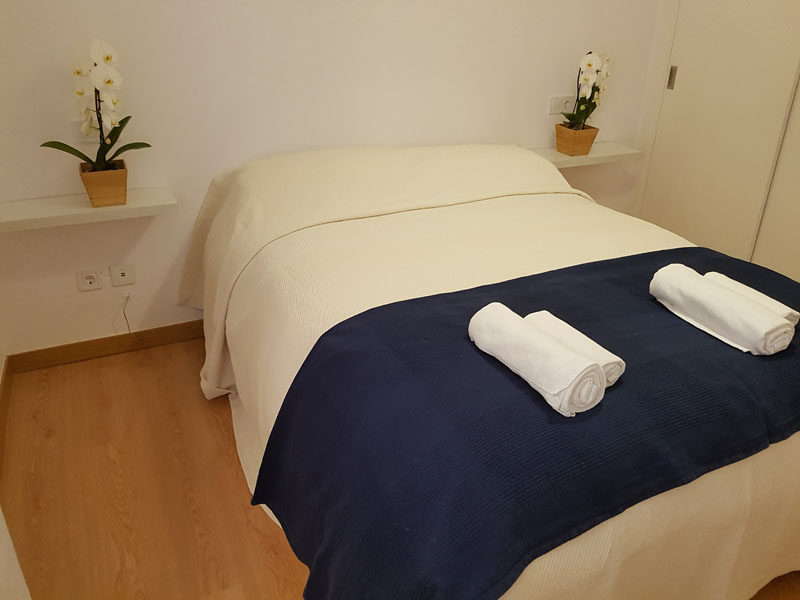 Relax and unwind in one othe the two bedrooms, both consist of king sized beds, double glazing windows, black out blinds and air conditioning/heating. 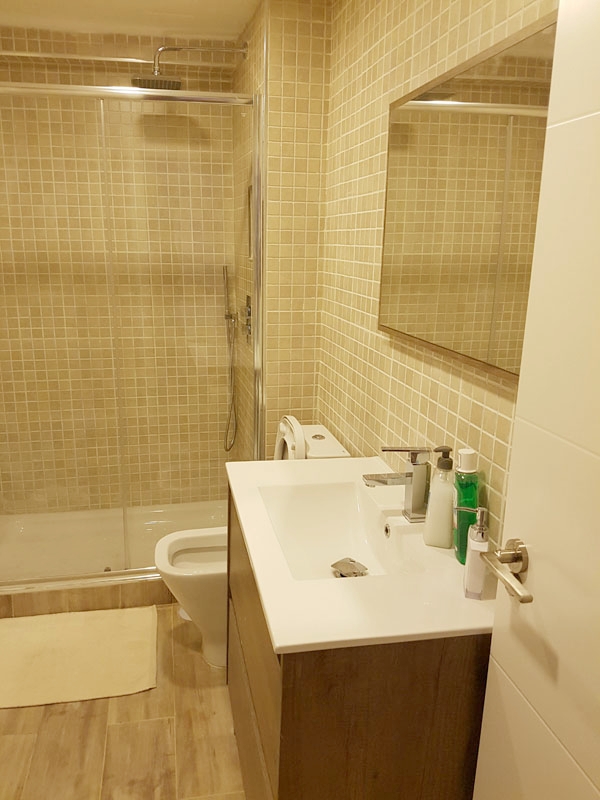 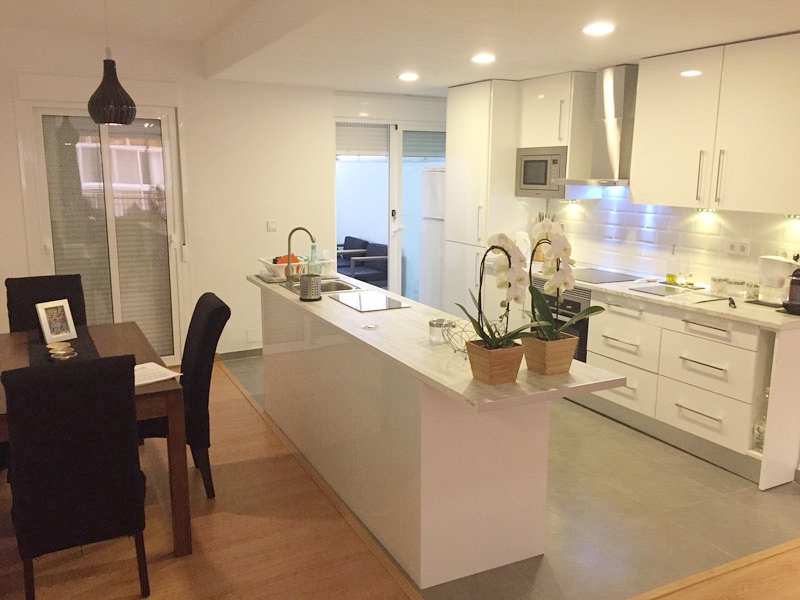 The fully fitted kitchen has everything you need for your stay, be it a nespresso coffee/tea or a 3 course dinner, this kitchen will cater for all your needs

The Gibralfaro castle casts a watchful eye over this warm-hearted and lively city full of attractive sites such as the Alameda Principal avenue and the La Farola seafront promenade.Its status as the capital of the Costa del Sol has made it one of Spain’s foremost holiday destinations, thanks to its mild climate, its beaches and its outstanding offer of golf courses.

Phoenicians, Greeks, Carthaginians, Romans… over 2,000 years ago the most important Mediterranean civilisations found in Malaga an exceptional place in which to establish trade routes, thanks to the strategic location of its port. The Alcazaba (8-11th century) is one of the symbols of the city, and one of the largest Arab fortresses in Andalusia. This building is today the site of the Archaeological Museum, containing valuable pieces dating from Phoenician and Roman times.The Gibralfaro castle (14th century) is linked to the Alcazaba by a section of wall and offers outstanding views over the city, which is open to the sea through its port and the La Farola seafront promenade, one of the city’s main leisure areas. At the foot of the Gibralfaro stands the Roman theatre, the bullring, (known as La Malagueta) and the historic quarter of the city.In the centre stands the Cathedral (16-18th century), also known as ‘La Manquita’ (‘the one-armed’) thanks to its unfinished right tower. This beautiful Renaissance building is home to an interesting series of chapels containing fine examples of Andalusian imagery. In the old part of town there are other interesting churches such as the churches of Santiago 15-18th century), with its beautiful Mudéjar tower, Los Mártires, Sagrado Corazón and Santo Cristo de la Salud.Historic Malaga offers a whole host of typical sites and corners. These include the façade of the Town Hall, dating from the early 20th century, and the Plaza de la Merced square, presided by the monument to Torrijos and the site of the house in which the famous painter Pablo Ruiz Picasso was born. A walk around the old quarter has to include the busy streets of Pasaje de Chinitas and Calle Granada, the site of the Museum of Fine Arts, and the Calle Larios, the main thoroughfare in the historic centre.The capital of Malaga also has numerous green areas such as the park, the Alameda Principal avenue, and the gardens of Puerta Oscura and Pedro Luis Alonso.Fiestas and the surrounding areaA good time to visit Malaga is during Easter week. This festivity, declared in Malaga to be of International Tourist Interest, features spectacular religious floats known as ‘pasos’ and displays of popular devotion in every part of town. The area around Malaga reveals a province marked by extreme contrasts between its inland villages and the coast. The Costa del Sol is dotted with towns and villages with a long-standing tourist tradition such as Benalmádena, Torremolinos, Fuengirola, Marbella and Estepona.

Also known by other names such as Plaza del Mercado (Market Square) or Plaza de Riego (Riego Square), it is one of the most beautiful squares in the city. At its centre is the Monument to Torrijos, a large obelisk that dominates the square.
It is also known for being the place where Picasso took his first steps, as the Fundación Picasso Museo Casa Natal is in the apartments, known as Casas de Campo, on one side of the square. Politicians such as General Riego, sculptors like Fernando Ortiz, writers such as Juan José Relosillas, architects such as Gerónimo Cuervo and painters such as Bernardo Ferrándiz have all lived in the square.